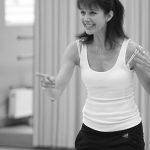 born in Los Angeles in 1962, studied many styles of dance with specific early influences from Irina Kosmovska, John Clifford and Melissa Hayden, Stanley Holden and Benjamin Harkarvy. She continued her education through her teenage years, under scholarship, with the Pennsylvania Ballet School and the School of American Ballet in New York. Andrea worked with Makarova and Company and with the Los Angeles Ballet. In 1983, she joined the Ballet Frankfurt under the direction of Egon Madsen and subsequently, from 1984-1999 worked for William Forsythe. During this period she worked extensively on the development of creations and concepts with William Forsythe. She is now a reconstructor for William Forsythe’s pieces. Andrea is a teacher of classical ballet technique, composition and improvisation, as well as a choreographic assistant, ballet master and reconstructor. From 1999 – 2002, she was based as ballet master with the Gothenburg Ballet and then worked freelance until October 2009. She has taught classical ballet and assisted in creations for companies such as The Royal Danish Ballet, Norwegian National Ballet, Netherlands Dance Theater, Gothenburg Ballet, Cullberg Ballet, The Royal Ballet of Flanders, Houston Ballet, The Portuguese National Ballet and The Vienna State Opera Ballet. During this period, she worked on pieces by choreographers such as Ohad Naharin, Jiri Kylian, Sidi Larbee Cherkaoui, Jacopo Godani, Didi Feldman, Twyla Tharp, Martino Muller, Pascal Touzeau , Douglas Lee, Per Isberg, Tero Saranin, Tim Rushtin, Alicia Alonso and William Forsythe.